There is just something about the Ozarks that calls me to the Oak covered ridges. Things move slower there and for me it is where I want to be. Over the Thanksgiving break my gang, my dad and both boys traveled to Kansas for pheasants and then stopped halfway home in central Missouri for a trout fishing extravaganza…and that was exactly what we got.

I have written several times about Bennet Spring, located just west of Lebanon, Missouri on highway 64…about 12 miles; it is one of those Ozark spots that calms me. We left Larned, Kansas by 6am and made our way across the eastern plains of Kansas, through the Flint Hills and just as we crossed into Missouri we picked up the rolling

topography of the Ozarks; two hours later we took a left off of Highway 32 onto county road OO and dropped into the Bennet area. We had just two hours of legal fishing time left as catch and release season runs from mid-November until late February with fishing hours from 8am to 4pm. After securing a license for both boys I quickly threw on my 5mm waders and dropped into the stream, my 3 weight rod and sinking line in hand; my fourth casts proved effective as I felt a jab, that tug on the other end that I live for. I quickly strip set the line and had my first of 53 trout on the line. Though he was only about 12 inches he put up quite a fight on my small 3 weight equipment and was quite a thrill to land.

I caught one more trout before switching to my 6 weight sinking line as the wind was a little too stiff for the small version…and I was able to pick off a total of 12 trout, ranging in size from 10 to 15 inches over the remaining hour and a half. The beauty of catch and release is the simple fact that there are less people, lots less in fact as we had very few other fishermen to deal with and that gives more room for swinging flies…which is what we do with our weighted lines.

The next morning, Sunday, November 28th, found us up early and at the stream about an hour ahead of the legal start time of 8am. As we pulled in we noticed that there were two Bald Eagles sitting high atop a Sycamore tree overlooking the stream. As if on cue, one of the majestic birds dropped from its perch and flew straight down the stream. The grand bird was just below the level of the bank as I watched it swoop down on the water and could see the water splash up and around it…I eagerly awaited as it rose into a nearby tree, but to no avail as the bird had apparently missed his morning meal of a plump trout. Regardless, it was one of those sites that are so rare and spectacular and I was thrilled to have shared it with my boys.

Our day was just short of spectacular…in fact it is days like these that I truly live for. There were a few other folks but for the most part the stream was clear and all three of us, Harrison, Jonas and I were able to move unimpeded along the stream casting both near and far to areas that looked like they might hold a trout; and on the day we caught in excess of 50 additional trout. The scenery in which we were able to fish in was truly special as it was a combination of a western trout stream and a dab of “Where the Red Fern Grows

“; with crystal clear blue green water flowing northward at approximately 52 degrees…it made for a great time to be on the tight end of a number of good trout.

The beauty of Bennet Spring and the Ozarks is several fold as the trout stay active throughout the winter season, in fact twice while were there a hatch of caddis exploded around us and looked and felt like snow…when that happened it quickly turned the trout on to another level. Not only does the fishing continue to be good but the scenery is exceptional; knowing that most of the good spots can be reached in 5 to 8 hours driving time, is there any more of a reason needed for you to load up and take in some awesome trout fishing while Enjoying the Great Outdoors.

What a better way to spend a day during an epidemic than to walk a beautiful, quiet trout stream in search of a few rainbows. Missouri has four trout parks; Roaring River trout park is the farthest west, located in the southwestern corner of Missouri, near the town of Cassville. Catch and release fishing in […]

Streamer Tips to be a Better Fly Fisherman

Today’s blog and video come about as a result of literally dozens of questions sent to me each fly fishing season. I realize that fly fishing is hard … but so worth the time placed in getting better. So, below are some general and streamer tips that are backed up within the video. Take some […]

Day two of my Missouri trip found me back on the spring at Bennet Spring State Park a little after 8am; this time I would be fly fishing Zone 2. While in catch & release season, Zone 2 is flies only. During the regular season (March to the end of October), Zone 2 is flies […]

Welcome back … and here is hoping that 2021 is much better for you than 2020! I have to say that the start to the New Year is rocky at best. Like most of you … I spent Wednesday of this week watching a horrible scene in our Nation’s Capital. Still can’t believe what I […] 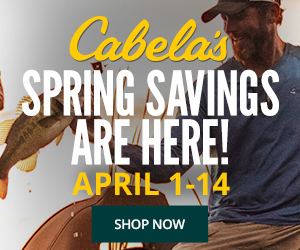